Toshiba files unaudited results and says future is in doubt

Toshiba has filed its delayed financial results, warning that the company’s survival is at risk.

“There are material events and conditions that raise substantial doubt about the company’s ability to continue as a going concern,” the company said in a statement.

The electronics-to-construction giant reported a loss of 532bn yen (£3.8bn; $4.8bn) for April to December.

However, the results have not been approved by the firm’s auditors.

These latest financial results have already been delayed twice and raise the possibility that Toshiba could be delisted from the Tokyo Stock Exchange.

Toshiba’s president, Satoshi Tsunakawa, apologised for the problems facing the firm and called the auditor’s decision not to approve the financial report as “truly regrettable”.

He said he hoped the company would not be delisted.

Toshiba, originally known for its consumer electronics products, has faced a series of difficulties.

An accounting scandal, uncovered in 2015, led to the resignation of several members of the firm’s senior management, including the chief executive, after the company was found to have inflated the previous seven years’ profits by $1.2bn.

Its problems came to a head again in January this year, when it became clear its US nuclear unit, Westinghouse, was in financial trouble.

Westinghouse was put into Chapter 11 bankruptcy in March, which protects it from creditors while it undergoes restructuring.

This week, Taiwanese electronics manufacturer Foxconn was reported to be willing to pay up to $27bn (£21.7bn) for Toshiba’s computer chip business, a move which could help shore up the losses if it went ahead.

But that has not been enough to resolve Toshiba’s difficulties.

The firm’s auditors, PriceWaterhouseCooper Aarata, have refused to sign off the company’s accounts, resulting in their publication being delayed twice.

Now, faced with a deadline, Toshiba has made the unprecedented move of publishing the results without the auditor’s approval.

Toshiba’s statement added: “At the present time, substantial doubt about the company’s ability to continue as a going concern exists as of the filing date of the quarterly report.”

The loss reported is for the first nine months of Toshiba’s financial year, covering April to December 2016. 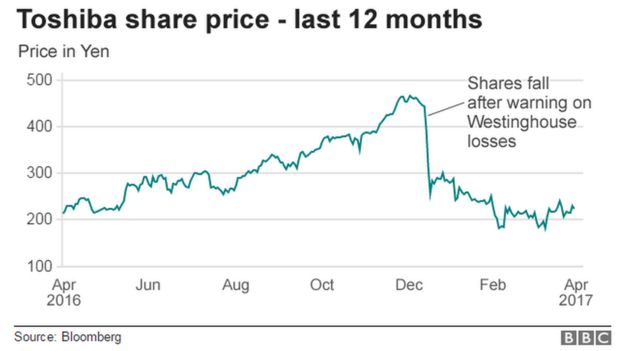 Toshiba has previously warned that its net loss for the full year could exceed one trillion yen, which would make it one of the biggest losses in Japanese corporate history.

Toshiba is the world’s second-largest chip manufacturer, with its products used in data centres and consumer goods worldwide, including iPhones and iPads.

Mar 2011: The Fukushima disaster makes nuclear power a much harder sell around the globe

Jun 2015: Toshiba is found to have inflated its financial results by $1.2bn over the previous seven years

Dec 2016: The company warns that its Westinghouse subsidiary is set to lose $4.3bn. Toshiba’s share price falls by more than 40% over three days

Jan 2017: Toshiba says the unit that makes memory chips for smartphones and computers – NAND – will be split off so it can sell a slice to raise funds

Feb 2017: Toshiba delays reporting its Q3 earnings (Oct-Dec 2016). Chairman Shigenori Shiga resigns. And the company says it will take a $6.3bn hit due to losses at its US nuclear unit

Apr 2017: Toshiba finally puts out its Q3 results, without the stamp of approval from its auditors, with a warning that its future may be in jeopardy